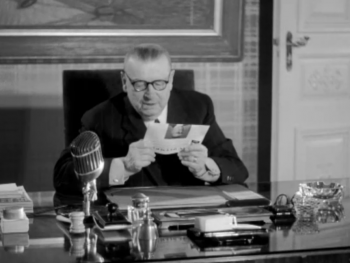 J. K. Paasikivi (1870-1956) was the seventh President of Finland. As an experienced diplomat, he spoke many languages. On the eve of the 1952 Olympics, held in Helsinki, the President made a speech also in English, although English was not quite his forte. French was for long the language of diplomacy, and in Paasikivi’s time English did not yet have the status it now does in world politics. Despite his poor pronunciation, the President wanted to delight the international olympic guests arriving to Finland from around the world with a greeting in English.