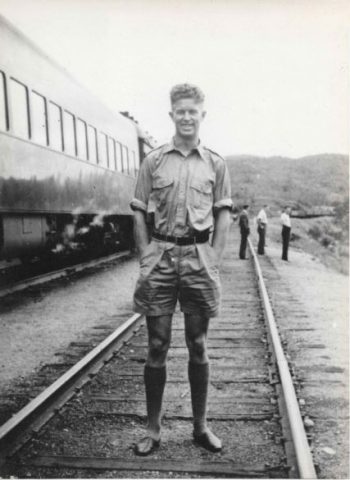 Jan Gert von Tangen (1917-43) was my mother’s younger brother. He was
the youngest child of King Haakon’s private secretary, Georges von
Tangen and Petra, his wife.

Jan Gert volunteered to fight in the Finnish Winter War, leaving Oslo
on Jan 6th, 1940. He was 22. Although Norway didn’t officially
support the Finns, it gave material support to equip up to 2000 men.
In the event, no more than 750 went.
Aside from clothing and weaponry, there were also donations made by
private individuals. Since my grandfather – in his capacity as
Secretary to the Cabinet – couldn’t be seen to be making a private
donation to the cause, it was made through his wife.

Major Finn Qvale, of the Norwegian Army, was responsible for ordering
and supplying the men’s needs. His report, published later in 1940,
tells how many of the young Norwegian volunteers had no experience of
dealing with the appalling weather conditions, the worst for 200
years, and in consequence suffered unbearably, not just from the cold
but from their ignorance of how to protect their equipment in the
prevailing conditions.

We still have items of Jan Gert’s clothing from the Winter War. His
white anorak, white ski trousers, his balaklava, his white sleeping
bag that I have mended whilst up at our log cabin in the mountains.

He returned to Oslo on April 9th, 1940, the day the Germans occupied
Norway. My mother used to tell us how she had run through the streets
to the Eastern Railway Station, in a desperate attempt to head him off
before he ran into any German soldiers and acted unwisely.

He spent one night at home before rejoining his regiment to defend the
country. As soon as Norway officially surrendered, he clubbed
together with six friends, to buy a fishing smack and sail it over to
the Shetlands.

Thereafter he made his way to Canada, to join the fledgling Norwegian
Air Force, now located in what became known as Little Norway. He
would refer to his time in Finland, as well as his experience during
the short-lived campaign against the Germans, in his fund-raising
tours throughout North America.

On becoming a pilot, he was seconded to the RAF, where he flew
Mustangs. He was killed over France in October 1943. He was just 26.

His death was commemorated in the village of St Meloir des Bois,
Brittany, in November 2013, 70 years after his death. Both my brother
and I attended the three day celebrations, along with representatives
of both the British and the Norwegian Embassies and scores of service
personnel, together with all the people from the surrounding villages,
who had wanted to do him this honour.