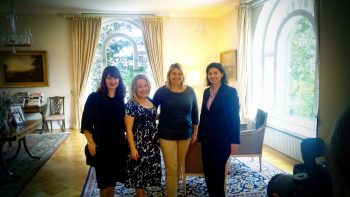 I was honoured to have the opportunity to launch A Tale Of Two Countries in Helsinki.

There were supporters from both nations at the launch and it reminded me why international cultural collaboration is so vital.

Indeed, it was the coming together of the British Library, The National Archives of Finland and the National Library of Finland that led to the launch of the online gallery.

The project offers visitors an insight into the shared cultural, political and social history of Finland and the UK, and I’m delighted to join all those who have added their memories about travelling and living in the two countries to this wonderful living record.

When I travelled to Finland in September I saw first-hand the cultural connections between our two countries are strong and important.

I heard how, since 2012, the British Council has supported the residency of a British designer at Helsinki Design Week.

Earlier this year I also attended the opening of Southbank Centre’s Nordic Matters programme in London.

It is hugely important for our country to have been chosen to host it and it is fantastic thousands of people have already visited the year-long celebration of Nordic arts and culture.

The event was arranged in partnership with eight Nordic countries and it felt particularly special in the year we celebrate 100 years since Finnish independence.

Finland has a unique cultural identity and I’m pleased the UK, through the British Council and our cultural institutions, plays a role in supporting that.