An account of a recent visit to Norway, Sweden, Finland And Russia

Jonathan Bayley describes his visit to Finland as follows:

“From Stockholm, I passed on by steamer to Finland. This country formerly belonged to Sweden, but in 1808 it was taken by Russians, and has ever since been governed by Russia, but with a gentle hand. The country is beautiful, very extensively wooded, and has only one million inhabitants. It has several towns nicely situated.” 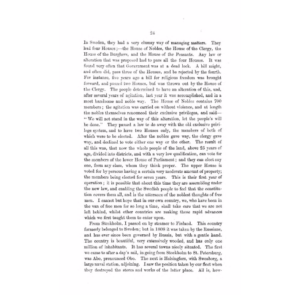 “The inhabitants of the coast towns of Finland are a very cultivated, honest, genial, well-conducted class of people. They know a good deal of England, and are fond of Englishmen. They are polite, hospitable and kind in every way. Their chief trade is in timber, Baltic Timber. It was wonderful to see at Wiborg the immense heaps, stretching for miles, which were ready to come to England. The country is governed by a Constitution, and the Emperor of Russia respects that Constitution. He assumes the title of Grand Duke, opens their parliament, and allows them to govern themselves with their own laws, and to preserve also the very questionable privilege of having their own coinage. Everything is free and well managed. They have a language of their own, and at the ends of the streets there is the name of the street in Finnish, Swedish and Russian.” 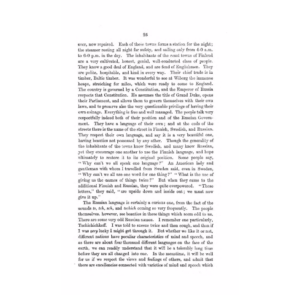