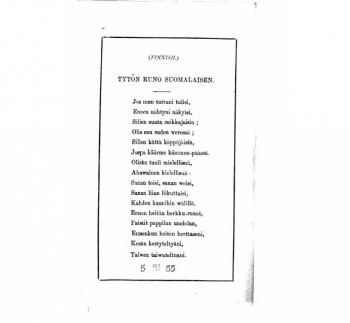 Song of a Finlandian Country-Girl

The oldest and most widely used form of women’s literature in Finland was, as in the other Nordic countries, the oral tradition of folklore. Proof that world literature could also be produced in Finnish came in the form of Elias Lönnrot’s (1802-1884) national epic Kalevala (1835, 1849) which, like the lyrical poems in Kanteletar (1840), was based on a compilation of folk poetry.

The most famous Finnish song of all is a glowing avowal of love. “Jos mun tuttuni tulisi” (If My Friend Came Wandering) was first written down in the eighteenth century. It was translated and printed in English, German, French and Dutch in the early nineteenth century. The first known interpreter was a young peasant woman who served at a vicarage in south-west Finland. The recorded material, however, suggests that even men sang it. Given the neutral first-person pronoun in Finnish, the narrator remains undefined.