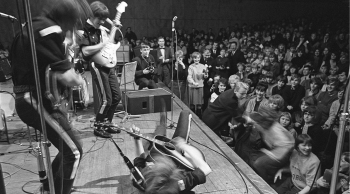 The Renegades – Rockstars in Finland

The Renegades, fairly unknown in its home country, England, became extremely popular in Finland in the 1960s. The energetic band from Birmingham caused hysteria easily comparable with Beatlemania. The band, vocalist Kim Brown, guitarist Denys Gibson, bassist Ian Mallet and drummer Graham Johnson had long hair, a cool, dishevelled look and they performed in outfits that resembled cavalry uniforms. Their concerts were energetic and wild (wilder than the Finnish rock’n’roll bands)s, as were their fans: once a group of over excited fans tried to topple their tour bus. At home in Birmingham no one believed the band when its members tried to tell of their success in the far away Finland. After mid 1960s the band’s popularity began to fade.