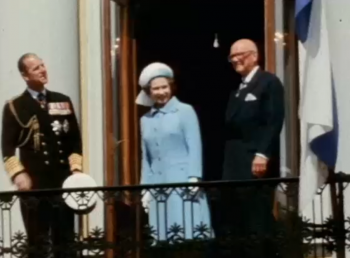 Elizabeth on the Balcony of the Presidential Palace

CATEGORY Society & Politics PARTNER The Yle Archives LINK TO SOURCE http://yle.fi/aihe/artikkeli/2006/09/08/elisabet-ii-kekkosen-vieraana
Elizabeth on the Balcony of the Presidential Palace

President Urho Kekkonen hosted the visit to Finland of Queen Elizabeth II and Prince Philip, Duke of Edinburgh. The state visit in May 1976 included, among more serious agenda, eating pancakes and drinking Koskenkorva vodka. Queen Elisabeth appeared on the balcony of the presidential palace in Helsinki for only a moment, which was a disappointment for many Finns who had waited on the street to see her.