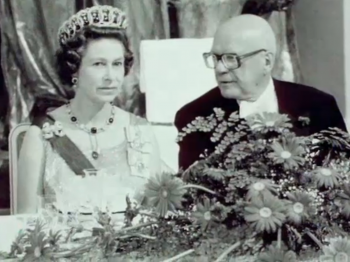 The Speech of Elizabeth II for Finns

On her visit to Finland in 1976, Queen Elizabeth gave a speech in which she told that Finnish people have a good reputation in Britain. Finnish hospitality was mentioned in an English atlas already in 1680. The Queen lightens the atmosphere by remarking that despite the disputes between the nations in the past, her voyage past the Suomenlinna fort to Helsinki was entirely peaceful. When speaking of the trade relations of Finland and Britain, the Queen mentions that two Scottish gentlemen have greatly influenced the industrial development of Finland: James Finlayson and William Crichton. Britain was a very important export destination country for Finland. The Queen praises Finnish art, design and musicians. She says she admires the development Finland has made during the last 30 years and the influence President Kekkonen has had as Prime Minister and President. The presence of Finland in international negotiations and peacekeeping operations was greatly due to the foreign policy lead by Kekkonen. Finland could be proud and grateful for many things, of which several were personal accomplishments of President Kekkonen. At the end of the speech the Queen raises a toast to Finns: ”I raise my glass to the president of Finland, to his achievements, and to the happiness and prosperity of the Finnish people.”