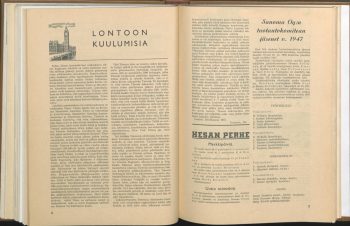 “London is simply too big” – Difficulties of a Finnish Correspondent

After the war in 1947 Eero Petäjäniemi, who had returned for another term as London correspondent, wrote an article to the staff magazine of the Helsingin Sanomat Newspaper, called Hesa.

In this article he writes of the newspaper field in the UK, the high quality of The Times and also the difficulties he has faced as foreign correspondent. Lack of contacts was an obvious obstacle, but he states frankly another fact that surely many who have come to London from smaller cities feel: “London is simply too big,” he writes. 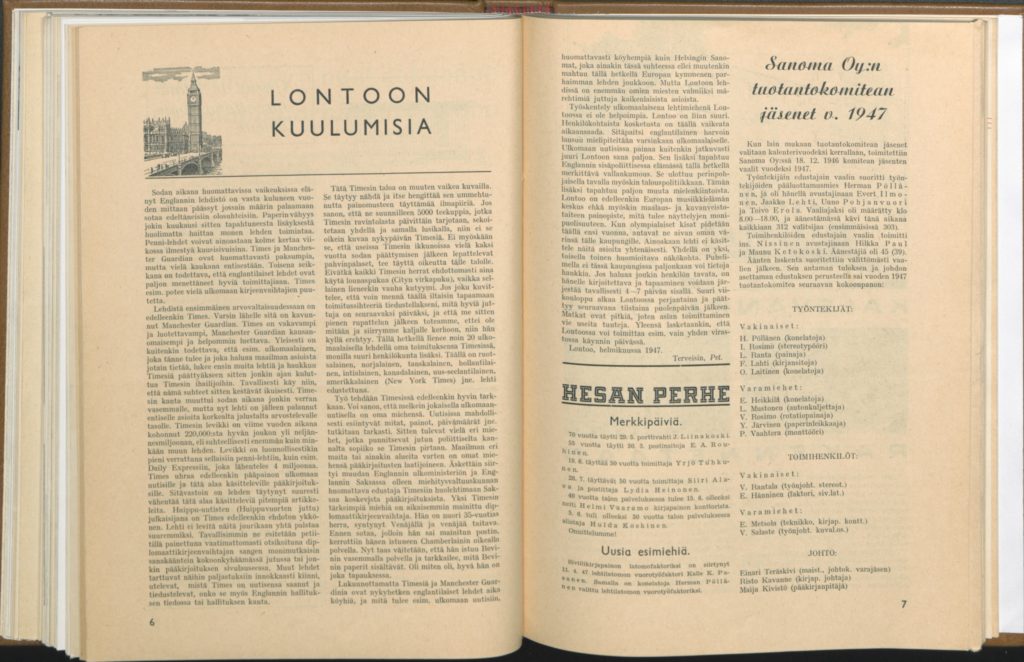 Petäjäniemi begins by describing the state of newspapers in England after the war. “The English press has only during the passing year been able to return somewhat to the condition it was in before the war. The shortage of paper still troubles many newspapers, despite the addition made some months ago. Penny-press newspapers can be published in six pages only thrice a week. Times and the Manchester Guardian are notably thicker, but still far from what they used to be. Another matter is, that English newspapers have lost many good reporters. E.g. Times is lacking foreign correspondents.”

“Times still comes first in prestigiousness of all the newspapers. The Manchester Guardian has caught up, but Times is still more serious and trustworthy, while Manchester Guardian has a more popular style and is easier to read. … Times still places great emphasis on foreign news and editorials regarding foreign news. However, the paper has had to greatly decrease the amount of lengthy articles around this area. Regarding top news, Times is still unbeatable. The paper seldom spreads them lengthier than one column. Usually they are presented in tiny print, modestly titled, and in some rather complicated wording of a diplomat correspondent or in some subordinate clause of an editorial piece. Other papers then eagerly cling to these revelations and fish for information of where Time has got its information from and is it possibly known by the parliament too.”

He goes on to describe the Times’ building and its atmosphere drenched with printing ink and 5000 cups of tea poured daily in the cafeteria. Finally, he reveals the frustration of working as a foreigner in London: “Working as a foreign journalist in London is not the easiest of tasks. London is too big. It is difficult to get personal contact, and the English seldom says his opinions aloud to a foreigner. … One can get hardly any information in this city with a telephone. If you wish to meet someone, you must first write to him, and a meeting can usually be arranged within 4–7 days. Distances are long, so running an errand can take hours.”